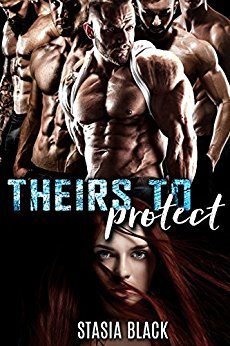 Theirs To Protect by Stasia Black

In a world where there’s only one woman for every twelve men, a lottery is the chance for five lucky men to win the prize of a lifetime… her hand in marriage.

Nix never put his name in the marriage lottery for a reason.
He doesn’t need a woman.
There aren’t that many to go around anyway, not after a genetically engineered virus wiped out 90% of the female population.
He has his job as the head of the Security Squadron and it’s all he needs. He looks out for the township. He protects the few women who are left.

But when his name is called to be one of the five husbands to the woman rescued from the badlands, he doesn’t speak up to correct the error.