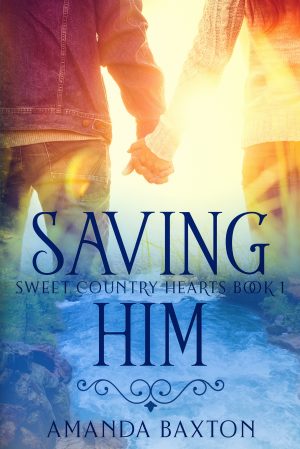 Saving Him by Amanda Baxton

The brightest light can be found at the end of the darkest tunnel.

It is often said that two wrongs don’t make a right, or do they? Bennet found himself dazed and confused, the memories of the last few days completely gone as his body fought to gain control after a night of drinking and drugs. The newspaper had detailed all of his wrong doings from the night before, and this country singing star finally had enough. His pathway to recovery would lead him home, and back to what got him started in the music business to begin with.

The other wrong in the story would be that of Edie Gibson, a young girl on the run from her abusive soon-to-be husband. Edie had finally decided to make a run for it, to save herself, and whatever life she might have left. But paranoia and lack of sleep led her to the hospital. But not before being rescued by a cowboy riding a horse. As Edie makes a full recove