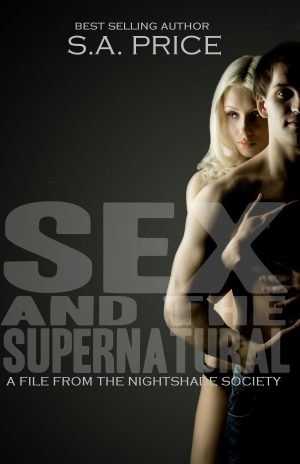 Sex and the Supernatural by S.A. Price

Tara Gavin belongs to the Nightshade Society, an elite group that takes care of all the nasties that roam the night, especially ghosts in all their wicked incarnations. A woman with secrets of her own, she is plagued by an insatiable need for physical contact on a daily basis.
Two nights before Halloween, she’s called in to save some stupid amateur ghost hunters from a house that has long been on the Society’s black list, and gets trapped inside. Trapped with a sexy man with horns that is not supposed to be there.
Antaeus Folle is a demon who was tricked into the caretakership of the Hoyt Mansion and its murderous inhabitants. When all Hell breaks loose and he finds a sexy, dangerous as hell woman snagged in a trap room, he realizes that if he plays his cards right, he could end his tenure as babysitter and go back to the life he was ripped from.
He just didn’t count on the woman he s