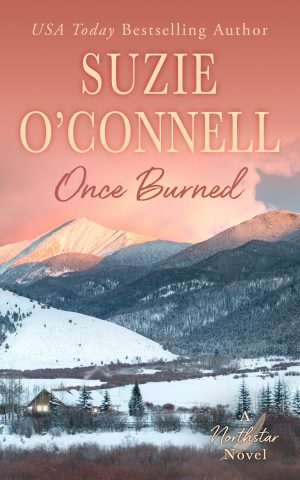 Once Burned (Northstar #5) by Suzie O'Connell

Lindsay Miller and Henry Hammond aren’t looking for love, but a one-night stand may turn into something a lot bigger… and last a lot longer than her vacation.

Lindsay has sworn off men until her son is old enough not to be hurt by them, but on a kid-free vacation to see her best friend married off, a casual fling with a willing cowboy reminds her that she’s more than a tired, struggling single mother.

Devastated after learning that his son isn’t his, Henry is in no mood to entertain ideas about starting a new relationship, but when Lindsay boldly introduces herself, he’s intrigued. She’s fiercely independent but also vulnerable after dating the wrong men. Even after Lindsay returns home, Henry can’t stop thinking about her. This could be the real deal, but how can he prove that she and her son are more than a rebound family for him when they’re seven hundred miles away?