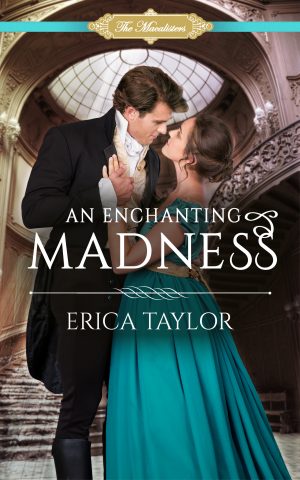 An Enchanting Madness by Erica Taylor

Lady Norah Macalister is perfection: beauty, charm, grace, elegance– all a carefully constructed lie. No one would ever suspect her of anything scandalous, and no one is the wiser when a terrible secret threatens to destroy her.

Major Trevor Hayward has unraveled after a decade at war with Napoleon—or so everyone believes. When his cousin is murdered Trevor finds himself the prime suspect. Placed under house arrest at the home of his oldest friend, Trevor doubts those investigating his cousin’s murder will see past his marred reputation.

While Trevor and Norah collude and execute Norah’s plan, succumbing to the spark between them brings their secrets to light. Can they play with fire and not be burned? Or will the madness of their scheme be the downfall of them both?