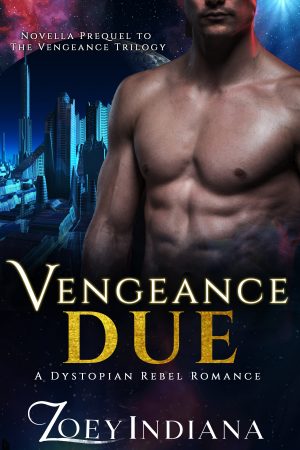 Vengeance Due (A Dystopian Rebel Romance) by Zoey Indiana

A powerful resistance leader ~ A carefree playboy ~ One little mistake that puts both of their lives on the line.

Nova has one goal in life, keeping members of the Resistance safe. After the dystopian government destroys her bar, Nova finds harbor in an underground colony, until they find that too.

Cay has the perfect life, the only man alive post virus with a planet full of women. As the government eliminates every threat, he must remain out of their grasp. After they ravage his home, Cay escapes with a woman he can’t stop thinking about.

When Nova and Cay barely escape, the last thing they expect is to find love. Nova swears vengeance against the government, but Cay is almost captured and killed. Can Nova and Cay survive to find a happily ever after?

If you love daring adventures, butt-kicking heroines, and couples defying the odds, then you won’t want to miss out… Downlo