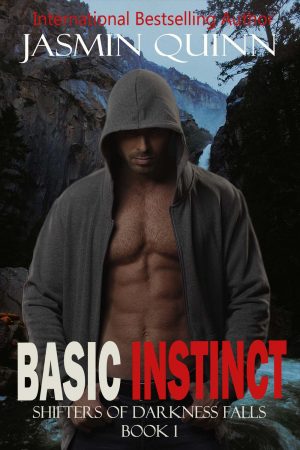 Primal. Savage. Untamed. The Shifters of Darkness Falls will leave you breathless!

Trist liked her life. Middle of the pack, no pressure, no expectations until she’s traded to a new pack. Now she’s the omega, bottom of the pecking order and has the attention of not only Raff, the savage, unfiltered beta of her new pack, but also a stalker who wants to make Trist his own. Raff doesn’t play nice, ever. And he gets what he wants. Right now he wants Trist and he’ll take out anyone who gets in his way. As the two follow their hearts, dangerous forces are at play that threaten not only their love but also Trist’s life.

This is Book 1 of Jasmin Quinn’s Shifters of Darkness Falls Series. All books are standalone but are connected by common characters and theme. This is a contemporary paranormal romance with suspense and intrigue. No cliffhanger. No cheating. HEA. Contains mature themes.