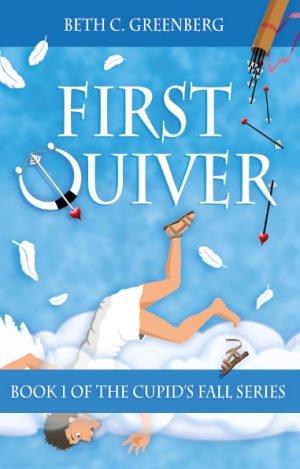 Immortality isn’t all it’s cracked up to be for the 3,375-year-old virgin of Mount Olympus.

Love is a game Cupid can only play from the sidelines; one day, he takes that game too far. Banished by the gods, Cupid plunges to Earth and lands in present-day Tarra, Indiana, where mortals live their lives, oblivious to the capricious gods above. At first, his sexy Earth-bod and newfound freedom feel more like gifts than punishment, but the gods have something terrible in store for Cupid: a taste of his own medicine.

Caught between two worlds on a quest to fix Love, Cupid must survive the violent throes of his own coming of age and triumph over the powerful gods conspiring against him. Failure will not be tolerated; success will cost him everything.

First Quiver pulls the reader inside the conflict between duty and love, a battle as old as the gods themselves.