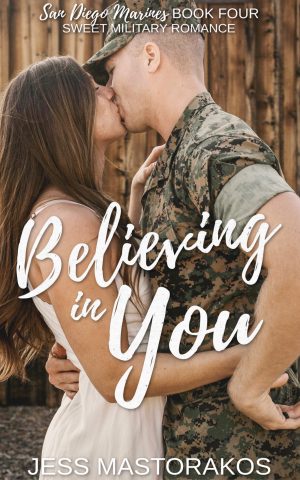 Believing in You (A Sweet, Brother's Best Friend, Military Romance) by Jess Mastorakos

How do you make a long-distance relationship last? Don’t fall for your brother’s best friend.

While on deployment, Jake Murphy takes to online dating hoping to find someone to share forever with back home. His connection with a beautiful kindergarten teacher is everything he was looking for. That is, until he realizes she’s his best friend’s sister.

After being dumped by her high school sweetheart, Ivy Brooks gets pushed into online dating by her well-meaning friends. Despite her reluctance, she hits it off with a handsome Marine. Too bad her brother would never be cool with her dating one of his friends … especially after what happened last time.

Jake and Ivy know they shouldn’t keep talking, but late-night flirting and inside jokes leave them both glued to their phones. Their secret is bound to come out sooner or later. Will their love survive the fallout?