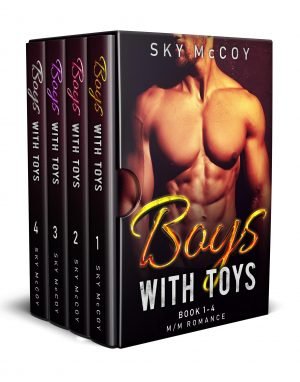 “Does falling in love have to be so hard?” Noah St. John questioned, and then answered with a few words, “F**k yes if you’re a gay man.”
Not all gay relationships are hard, but Noah wanted a man his boys and the world told him to forget, especially since the man he desired was straight, and he’s the quarterback for the New York Gladiators who just won the Super Bowl.
Jake Kincaid, is the most sought after baller in the league after he just won the game of a lifetime, all the while trying to recover from his wife’s death. He can’t seem to find love even when women are throwing themselves at his feet with their heads in his lap.
This four book series contain, fake boyfriend, age play and a HEA for each couple in boys with toys.