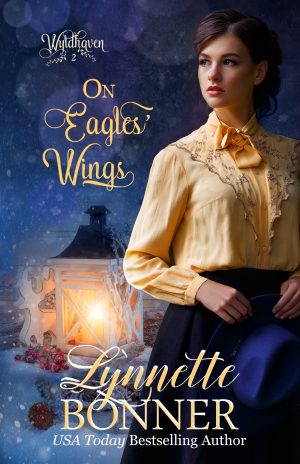 On Eagles’ Wings by Lynnette Bonner

Boardinghouse owner Dixie Pottinger has done her best to avoid the attractive Dr. Griffin. But now that her mother-in-law is sick and he’s going to be coming around more to care for her, Dixie knows she must inform him about her past. She works up her courage and feels great relief when she finally tells Dr. Griffin that she’s a married woman…maybe…if her husband, Steven Pottinger, survived the bullet put into him before she fled.

Dr. Flynn Griffin can’t believe he’s been having feelings for a married woman! His honor requires that he immediately put those feelings to rest. As for the man who had abused Dixie so badly that she retreated into hiding… If he was still alive, he better never show up in Wyldhaven, because Flynn had plenty of ideas on how to teach the man lessons in gentlemanly conduct.

Little does Flynn know that Steven Pottinger is about to become his patient.