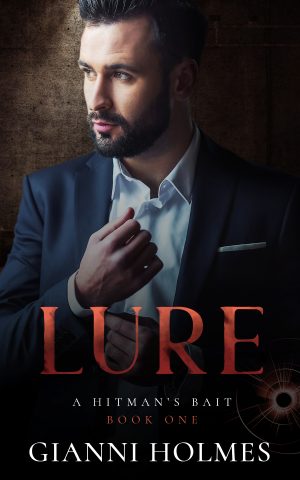 I’m the bait tasked with luring men into his trap.
I have no idea what he does with them.
I don’t want to know.
Until the night he tells me to run, but I stay.
Now I know what he’s really capable of…the blood on his hands…
But the danger, being part of something so exciting, only makes me want him more.

My life was simple before he swishes his way into it with his catsuits and kitty ear headbands.
I’m only interested in the men he gets me close enough to kill.
Until he pounces in my lap, meows at me, and changes everything.
I’m straight, but I want him.
I send him to lure men, but they must not touch him.
I take pleasure in seeing them want him, but know they’ll never have him.
This cat-and-mouse game between us can only end one way. Should I let him go before his innocence gets stained by the darkness of my world?

Lure is book 1 in a same couple series.